My Trip Through Maximum Security

When the Lorton prison first started as the Occoquan Workhouse, the idea was that prisoners could be rehabilitated with clean conditions, fresh air, and reasonable work. In the latter half of the 20th century and the advent of extreme drug enforcement and the push to jail folks no matter the offense, Lorton began bulging at the seams. The guard who took me through the facilities talked about the murders in the gym, the yards, the barracks...well, pretty much everywhere. Apparently you could get whatever drug made you happy, better than the street. Lots of cats. Lots of mayhem. When we walked through, the place had been abandoned for years and was targeted for renovation as a shopping mall. The max security part of the very large facility consisted of barracks, a gymnasium, and other admin and support buildings. Those are now high end apartments and condos. At the center of this part of Lorton was the high walled portion. Inside the wall were barracks with single prisoner cells, kitchen facilities, and the "Hole." All that's left of the Hole is the black foundation. The individual cell barracks were still there when I walked through, those will be converted to shopping and dining facilities.

I didn't go through all six of the barracks, only two of them and the kitchen or central facility (which now faces Silverbrook Rd). There was no electricity and the light was minimal.

The first image was on the ground floor of one of the barracks. In a hallway prior to the cellblock, I went into a room that was about 16x16' with no windows; the only light came through the doorway from a window down the hall, quite a few feet away.  I was startled by the colorful art which literally leapt out at me despite the darkness; Prisoner art I was told.

Before you enter a cell block there is an area, I don't know what it's called, it's like a foyer or waiting area. Some of them had metal tables, some exercise equipment, some were just empty rooms leading to the cells. This one had a tiger painted right next to the door. Prisoner art or guard art...who knows.

The third image was taken in one of the entryways to the kitchen. Of course all sorts of things go through my mind about how it was made and what the materials might have been. There is an outside chance it could have been done by intruders after the prison closed but the County has had an armed guard at the facility to keep prowlers out so I don't think so. I think that the symbolism and desperateness of the symbol speak volumes for where it is located. 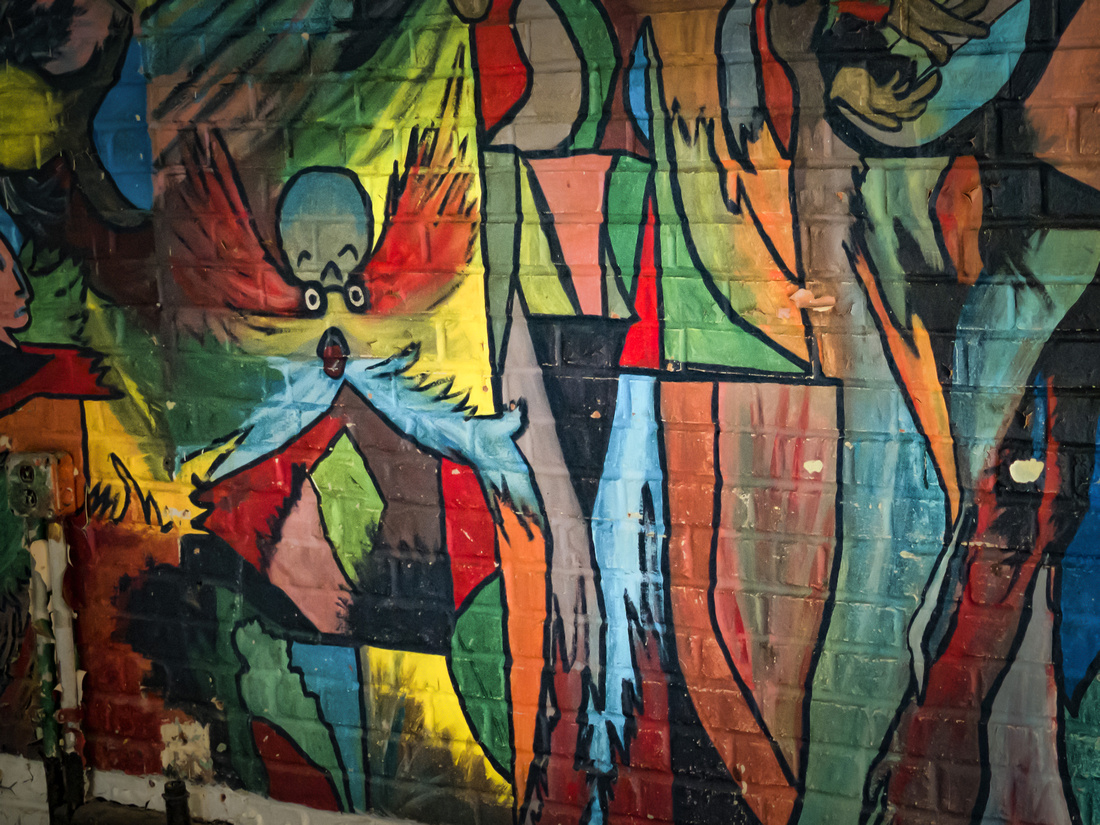 Prisoner Art Lorton, VATaken from the interior of a small room at Lorton. Not a cell, maybe an admin room. 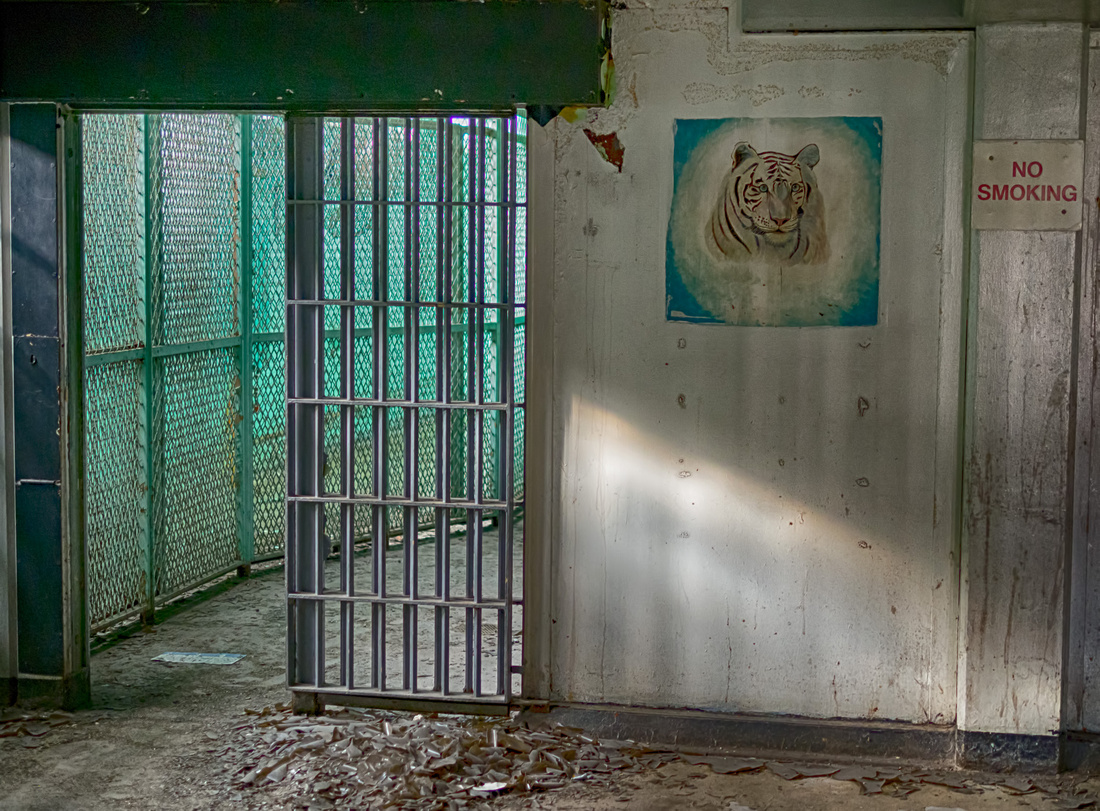 Prisoner Art, The Tiger, at Lorton Entryway to the cellblock at Lorton. Prisoner art on the wall in the waiting room 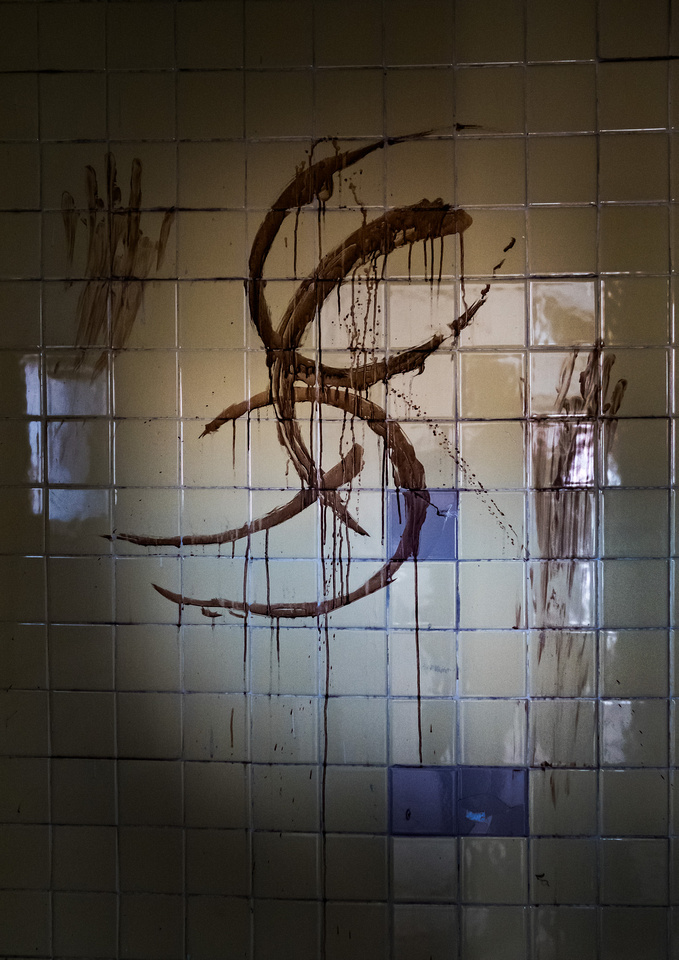