Tranquility. A place? A state of Mind? A space Station? All of the above? I remember with relatively great clarity (or at least I think I do), July 20, 1969, when man landed on the moon.  Tranquility Base was the first manned station on a celestial body besides earth. My story starts the week before the landing.

With virtually no planning two friends from Platte, SD, and I decided to do a mad dash from South Dakota to Lake Louise in Banff National Park in Alberta, Canada. After all, we were on summer break and had 7 days with no scheduled activities. Like the crazy 20 year olds we were, we packed our huge, heavy canvas tent, cooler, and other supplies for a week into my 1965 Mustang. We spent the first night in the Black Hills of SD, close to what was the Dinosaur Park. From there we drove to Yellowstone National Park where we camped in a place now closed to tent camping because of bears. And we did see a grizzly bear in the campground when we were there. The rangers brought a "bear trap" to the campground and put it about 100 yards from our tent. The trap was a very large steel culvert with a piece of meat on one end. The bear comes in one end of the culvert, pulls on the meat, and the door slams shut. They caught him! But honestly, we did not get much sleep that night.

From Yellowstone we drove to Glacier Park. It wasn't a pleasant drive, my Mustang did not like the exceedingly steep roads in the summer heat and my water temperature got too high. We ended up driving with the radiator cap off. I'm sure that's not a good thing. We apparently blew the thermostat, who knew? the downhill side was just as bad because I worried about my brakes overheating. I don't remember where we camped that night, probably too stressed out.

My father was born in Lethbridge, Alberta, Canada, and grew up in nearby Medicine Hat. We next stopped in those two places and looked at what had been his childhood homes. Not surprising, none of us 20-year-olds were overly impressed.

We next drove to Lake Louise in Banff. Except there was no place to camp and we couldn't get to the fancy hotel (not that we could afford to stay there). I don't remember why, perhaps because of the "No Camping Ahead" signs. We did park somewhere and hiked up a mountain so that we could see the lake as well as the lodge we'd heard so much about. Unbelievable blue water. But we needed a place to camp and ended up on Mt Eisenhower. The Canadians changed the name in 1979 back to Castle Mountain because why would you name a Canadian Mountain after an American president. I mean, really. Quick story about that mountain, we camped high, at the treeline and not "finished," that is no facilities. The next morning for some crazy reason, I decided I needed to wash my hair. Without thinking I stuck my head in the small creek next to our campsite. Wow. The water was so cold that I felt like my head was hit by a hammer.

On July 20, 1969, the last night of our journey, we were sleeping next to a cornfield someplace in Saskatchewan, Canada. The night sky was clear, the moon was out but i think it was a quarter moon. We were listening to my tiny little radio about Tranquility Base and man walking on the moon. Pretty spectacular, we thought. But so was our trip, we noted.

Circling back to Tranquility. The Japanese Gardens at Maymont are a place where tranquility reigns. The image is looking over the Moon Bridge to the waterfall.

Postscript. Last year, I reached out to my travelling companions. They still live in Platte, SD, and are doing well. 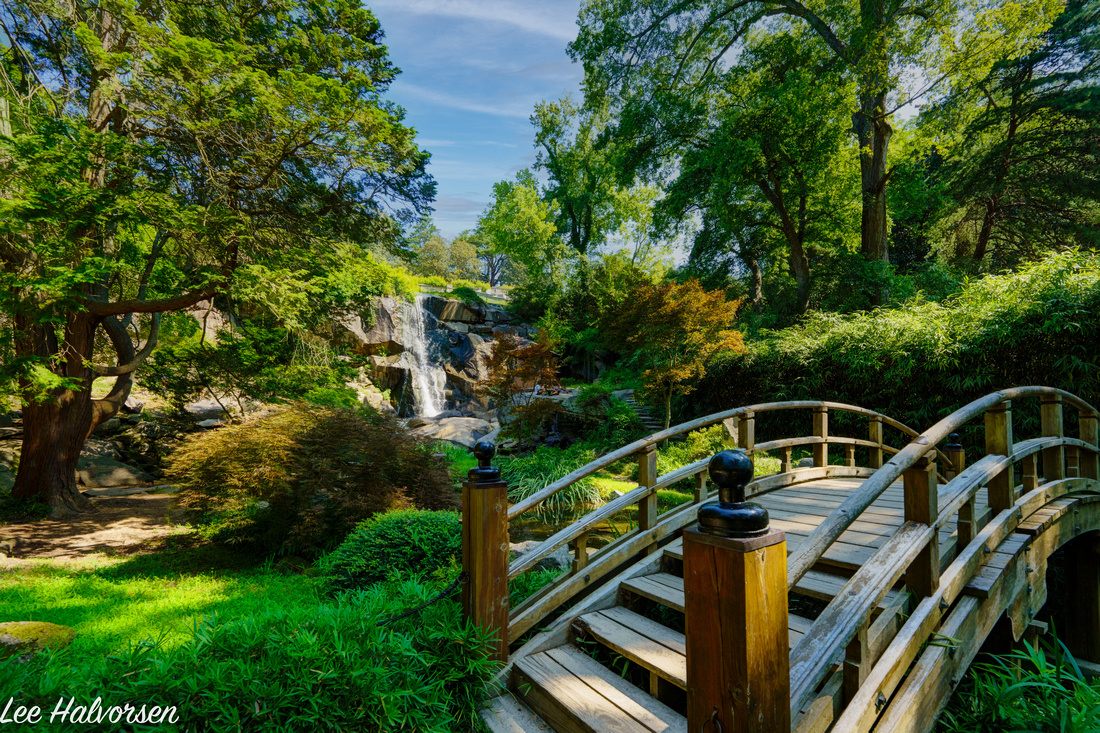 GALE l ANDERSON(non-registered)
You forgot to mention picking up 3 girl hitchhikers in Yellowstone and fitting them in your mustang, canoeing on Lake Louise, walking on the glacier, and your jacknife was not going to protect you from that bear in Yellowstone
Stacy(non-registered)
What a great story to pair with this image, Lee.
No comments posted.
Loading...
Subscribe
RSS
Recent Posts
Confederate Icons My Favorite Images of 2021 Ghosts of Hollywood Cemetery A Carved Stone, Perhaps Pipestone "Portraits" from Belmead Ghosts of Francis de Sales School National Landing Man Ray, The Paris Years Printing Newspapers To Facebook or Not To Facebook, That is the Question
Keywords
dc Lake alexandria washington park bridge Virginia potomac Museum Burke
Archive
January February March April May June July August September October November December
© Lee Halvorsen
User Agreement
Cancel
Continue