This past week in Huron the former employees of Huron's Armour & Co, Dakota Pork, and Swift had a reunion. Three different companies but one facility. I would have liked to have attended, I'm sure the ghost of my dad was attending...like the old Armour Men's Club Christmas parties.

My dad worked for Armour & Company in this plant, the same building, from the time it opened in about 1929 to when he retired in 1976. The plant was how he defined his life. He retired because in those days when you turned 65 they made you retire. If such a rule hadn't existed, he probably would have worked there until he died. For the last years of his employment he was the general manager...he'd started as a supply clerk in '29 and over the years did most of the jobs in the plant. He knew the work, knew how to do the work, and knew the people. I worked there during the summer for several years while in college. Being the boss's kid wasn't easy until I started working the cleanup crew at night. They asked only that I do my job, it was VERY hard work and in the beginning I had trouble. However, many in the night crew busted their asses so they could come to help me...a great memory. I don't remember all their names, Detraz, Peterson, many more. And Louis Kraft from the condemned room area, a cool guy who loved to fish. I was treated extremely well by one of the members of the management team, Joe Stahl. He was the best, knew the people, knew the work, knew how to talk to my dad, something that I never learned.

I went back to Huron in 2016 & 2017 for my 40th & 50th HS reunions. I wandered about during the 50th and ended up on the east side of town. The dam at Third Street always fascinated me, I understand it's different now. The railroad bridge above carried trains across the country; Armour used to have a spur just east of this bridge, dedicated to the plant. The railroads would alert the watchmen who would open the gates on both ends of the plant. In they'd go, decouple the cooler cars and head out the other direction. I remember one year there was a derailment at the spur and several of the cars came tumbling down the steep embankment.

A lot of memories from my Armour days...I think the Mens Club Christmas party at the Isaac Walton club was the most fun. When Armour sold the plant, my dad was very sad, when the plant was abruptly closed just a few years later, he was heart broken. He knew the people that worked there, as well as the community in general, would be hard pressed, but he was very Norwegian and so couldn't let the emotions show.

The first image is the old front gate at the plant. I was a watchman there. Everyone that worked on the plant side (not the Yards) entered through that gate. "Back in the day" Coors wasn't available in South Dakota because it was not pasteurized. In Coors' home state, Colorado, "empty" truckers would throw several cases of Coors in their empty, chilled trailers and head east, Armours in Huron was their last stop before they loaded up with beef for the return trip. If I had been lucky enough to be working when they departed the plant in Huron I would have ordered some beer. I would know when they were returning and would have picked up my case or two...$5 a case at this gate. Bootlegging? No.

The second image is the ruins of the "box building" I think. Not sure, it was built later. My dad explained that when they switched to only killing hogs, things changed...many, many things. Everything went out in boxes, no more cars filled with sides and quarters of beef.  When I worked there they were still killing beef and hogs. Although, I do remember the billy goats that led the sheep up the ramp to the 6th floor. My dad called them "Judas Goats" because they got to go back to the yards after they'd taken the sheep to the kill floor.

The third image I've previously posted but wanted to look again...it's the Third Street dam and the railroad bridge. Armour used to cut ice from the James and Ravine Lake, pack it in the "ice house" with hay and use the ice to keep the meat chilled in the summertime. Eventually the ice house was no longer needed and was torn down. I remember that a builder, Vern Groves I think, bought some of the wood and built a couple of houses at 13th & Ohio SW. Armour used to pump water from the river. I'm not sure exactly why...there was a pump house halfway between the river and the plant. I believe at some time they pumped stuff back into the James and that wasn't very environmentally friendly. I remember dad was happy when the water treatment ponds were started just east of the plant. Speaking of the environment...Armour used to have a very tall smokestack which would bellow smoke from the meat packing process. Normally the wind blew from west to east so you'd never smell the plant but once in a while, the wind would shift. People would complain and my dad would say, "That's the smell of money." Eventually they closed the ovens that caused that smoke and changed to high efficiency. environmentally friendly machines, however, the smokestack stood for many years after that. My dad was very proud when it was finally taken down. In fact, he spent most of his time figuring out how to keep the plant going. The building was very old and was setup based on early 20th century procedures. He was constantly afraid that Armour central management would close them down for inefficiency. He was especially worried when Greyhound of Greyhound bus fame bought Armour.

The last image is Armour & Co memorabilia that I still have. My sister also has some. I looked for an Armour & Co museum to donate but apparently there is no such thing. I am pretty sure my kids won't want this stuff so it'll go in a dump heap some day. Kind of sad when you think about how important the meat industry was to the industrialization of America. Railroads were extended to move livestock. Chicago and Omaha were meat packing giants. Dial soap was Armour. Who doesn't remember singing "Armour Hot Dogs?"  Like the plant...all gone. 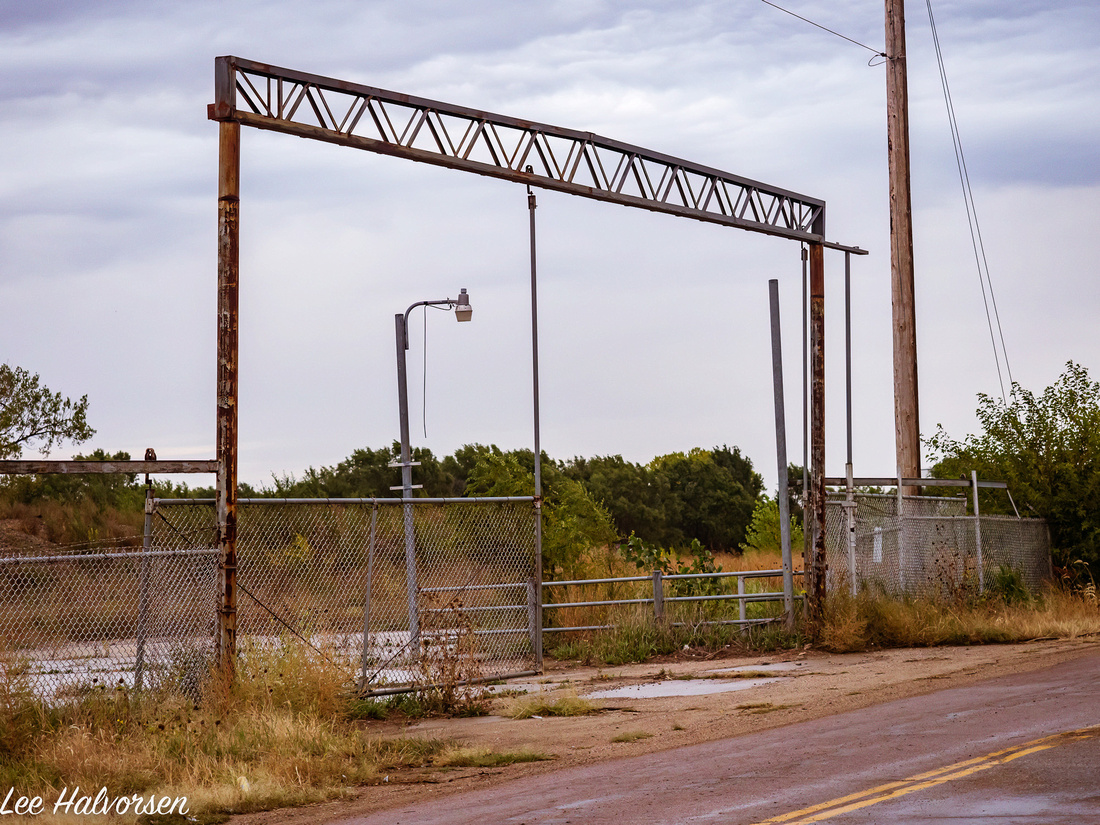 Armour & Co Entry gateThe main gate that most of us used to get into the plant. Guard shack and the rest are all gone 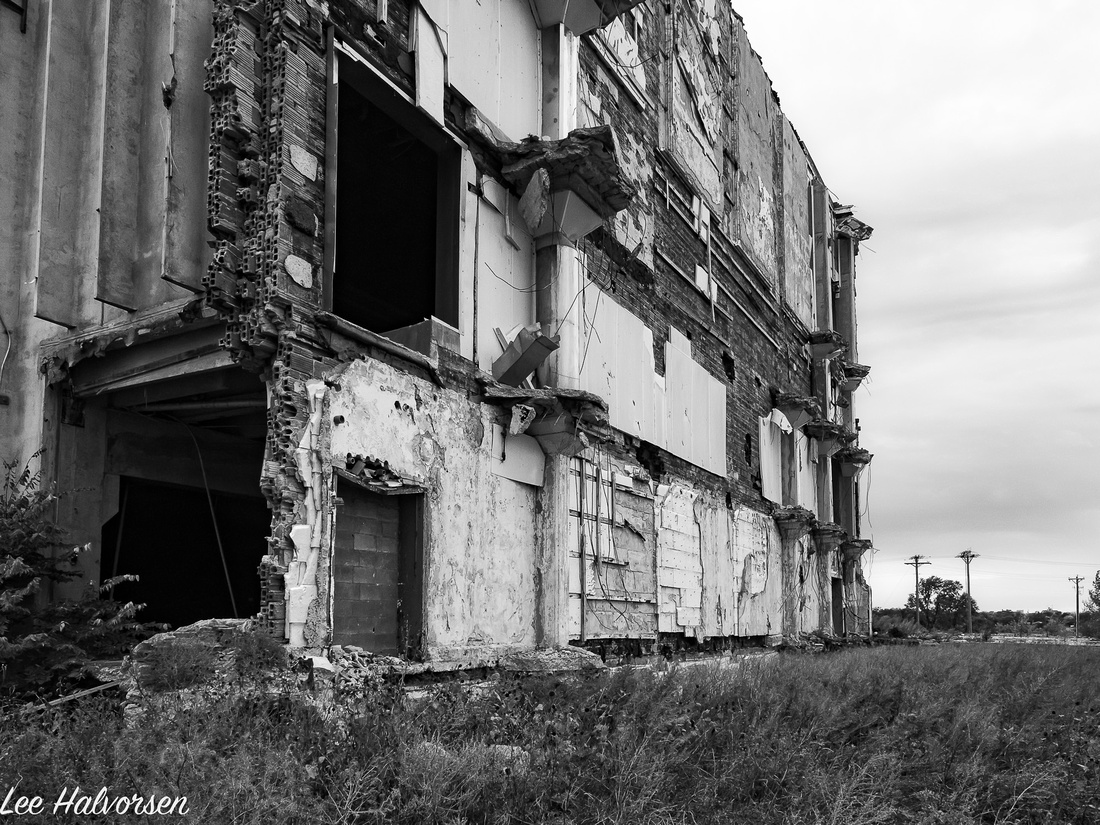 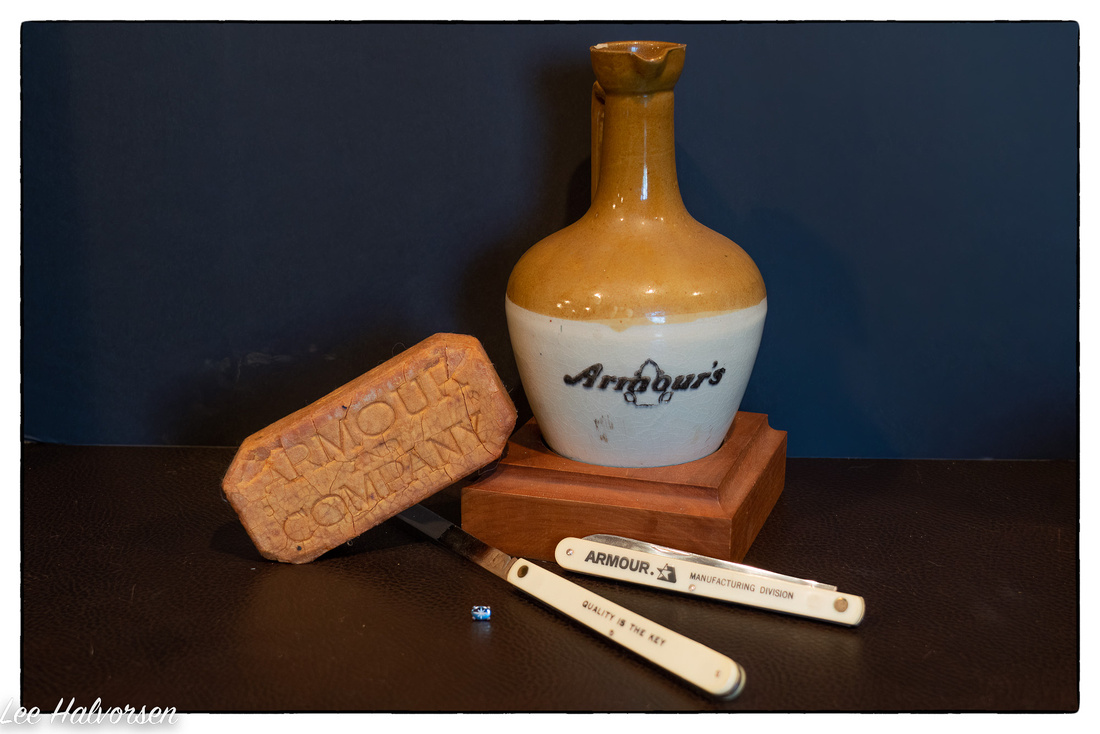